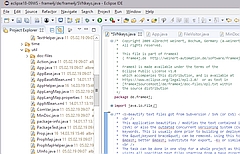 Frame4J’s installation is quite simple.

The minimum requirement is having the file frame4j.jar added as so called installed extension to your Java development kit (JDK) or runtime environment (JRE). This is done by downloading and putting it to something like
C:\programme\jdk\jre\lib\ext\ (on Windows) respectively to something like
/usr/lib/jvm/jdk/jre/lib/ext/ (on Linux *)).

This simple step will get you almost all of the tools and libraries working, also for Eclipse and else if using that augmented JDK. Missing in this minimalistic variant are the javaDoc and the extras for (serial) interfaces, pdf, mail and else.

[ download | repository | install | documentation / tools | on Pi | GIT issue ]
_____
Note: To have the benefits of Frame4J and installed extensions you have to have Java 8. Java 8 deprecates the 20 year old widely used and still propagated deployment via installed extensions. Thankfully a deprecation can be ignored.
Java 9 killed them by 2017 (as did all later versions). Since November 2018 we have an adaption (w/o jigsaw) to use all Frame4J tools except those requiring proven installed .jars (like pfd or RS232/485/usb handling). This branch isn’t maintained any longer as we and others stayed with Java 8 on big Windows machines down to little Linux ones, like e.g. Raspberries. See also the problems paragrah below.

All in one step

The easy way to have it all is

That’s it for Windows — and mostly for Linux also.

The JDK installation may, of course, be elsewhere. "java" in one Linux $PATH directory almost never is the programme — the .exe equivalent — but one (first) link in an often long chain to the real thing, the JDK installation we deal with. Nowadays it’s often something like
/usr/lib/jvm/java-6-openjdk/jre/bin/ or
/usr/share/doc/openjdk-6-jre-headless/.

To have the serial interfaces working on Linux also you’ll have to move some files around:
You may of course delete ../bib/bsDoesItNative.dll — the replacement being libLinuxSerialParallel.so and javax.comm.properties (from SUN’s commAPI or from Frame4J’s repository). They go to something like /usr/lib/ respectively /usr/lib/jvm/jdk/jre/lib/. In the meantime RXTX is beyond its premature state and has supporters for Win64 also. Frame4J will move to it.

If these conditions are met,

the following will work from any directory within a shell:

The first will open a window saying something on Frame4J’s version etc.
The second will display all system properties visible to your JDK and
the third will list the computer’s (serial and may be parallel) interfaces available for Java.
Note: Since Sun dropped the support for serial I/O ShowPorts will list those interfaces only when the extra .dll or .so are correctly installed. Otherwise it will tell what it thinks is missing. If you don’t want to use RS232 or RS485 with Java don’t bother with the subject.

If all is well you may wish to get acquainted to the other Frame4J’s tools Every Frame4J based tool will display a help text by:
java ToolName -?
or
java ToolName -help

The help texts are available in English or German depending on the system’s language or by options -de respectively -en.         Have fun.

As might have come clear from the above, since 18 years Frame4J and its predecessor will be deployed as installed extensions. Oracle announced to kill installed extensions with Java9. Since Java8_0_40 they’re deprecated. As one side effect an automated or manual JDK update deletes installed extensions on the workstation or server. This breaks running applications (when not immediately repaired) and may be considered as a bug. Lines like
java.exe Tool parameters
dwelling in server scripts and commit hooks, e.g., won’t get called any more.

As of August 2015 no real working recipe for migrating from installed extensions to the jigsaw concepts has been presented by Oracle.
"Make a module and bundle the libraries with the [one] application" is the the only advice found. It won’t do. Frame4J is a framework + some 15 applications which are all available as one installation. Those tools are widely used on own and customers servers for automated processes, for example in SVN hooks, since years.
Breaking this "Java standard deployment procedure" (since Java1.2, 1998) will hit Frame4J and may hit many others.
Let’s hope for a viable solution that won’t break customer installations and is ready before Java9 or critical Java8 updates that may come.